eSHa 2000 is a chemical fish treatment that has been designed to treat a number of different symptoms and diseases in both tropical and coldwater aquariums. Unfortunately, eSHa 2000 is not suitable for marine aquariums. eSHa 2000 treats both primary and secondary bacterial skin infections, fungal infections as well as skin and gill parasites.

I have been using eSHa 2000 for the last 4 or 5 years. It is my go-to treatment whenever I see signs of infection or disease in my aquariums. I personally have found eSHa 2000 to be very effective. I have only once run into a case of a fungal infection that the eSHa 2000 didn’t treat, and that was in a large fancy goldfish.

I also use eSHa 2000 as a preventative treatment as part of my quarantine trio along with eSHa exit and eSHa gdex. Whenever I get new fish they go straight into my quarantine tank and receive the appropriate dosage of the eSHa 2000.

Shimmying in fish, which is actually a symptom rather than a disease, is where fish rock their bodies from side to side and move in a snake-like motion. When fish are shimmying it is an indication they no longer have full control of their body or nervous system.

Shimmying is known to particularly affect Mollies and other livebearers. The main reason Mollies are affected so often is because they are usually raised at farms in water that contain either salt or lots of dissolved minerals. When we get our new Mollies home and place them into our freshwater aquariums, the Mollies’ bodies struggle to cope without the added minerals.

Fungus on fish presents itself as either a white or slightly off-white, cotton wool-like growth somewhere on the fish’s body. Fungus is usually a secondary infection and often arrives after a fish has injured itself. The fungus will also take advantage of a fish that is weakened due to other diseases or parasites.

With Finrot, your fish’s fins appear sore, ragged and torn. The edges of the fins usually turn red or white. Finrot can occur when fish are kept with other, more aggressive fish or as a result of overly enthusiastic breeding.

Left untreated, fin rot will usually develop into a secondary infection such as fungus.

If your fish is suffering from protozoan parasites it may be rubbing or flicking its body against rocks, plants, and decor. Your fish may also appear nervous or skittish. If the fish is showing white spots then the fish may be suffering from ‘ich’ also known as ‘whitespot’.

Open wounds and ulcers often appear when water conditions are less than perfect and may present initially as red patches on the fish’s body. Ulcers and wounds can also be caused by other aggressive fish, over-enthusiastic breeding, or fish having to compete for food. Ulcers and wounds, if left untreated, often lead to secondary infections such as fungus.

With mouth fungus, fish develop a white, cotton wool-like fungus on or around their mouth. Fish with mouth fungus will eventually struggle to feed. Mouth fungus is usually caused by flexibacter bacterium.

Dropsy is the name given to various viral or bacterial infections, most of which result in the fish becoming swollen. When swollen, the fish’s scales may start to protrude from the skin. The base of the raised scales may become red as may the base of the fins.

Although known as ‘Neon Tetra Disease’, it doesn’t just affect Neon Tetras. Other members of the Tetra family, as well as some Barbs and Danios, can become infected. Fish can carry Neon Tetra Disease without showing symptoms but still pass the disease on to other fish.

Fish suffering from Neon Tetra Disease may appear pale, swim in an unusual way, and become thin. The fish may develop discoloration in a distinctive ‘saddle’ shape behind the dorsal fin which will eventually spread until the entire fish appears colorless.

If your fish is gasping at the surface it may be suffering from one of a number of different gill problems including infection, fungi, or worms. eSHa 2000 will treat many of the common gill-related issues. 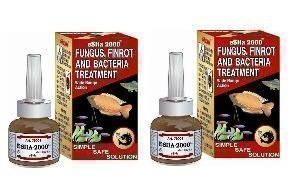 Other Features of eSHa 2000

I have found eSHa 2000 to work quickly. The treatment course itself lasts just 3 days, followed by a water change on day 5.

Below is the dosage calculator copied from the eSHa website.

Can eSHa 2000 Be Used With Other Treatments?

eSHa 2000 can be combined with eSHa exit (which is used to treat Whitespot) and eSHa gdex (which treats skin flukes, gill flukes, and internal worms). I have used this trio of treatments for every fish that has passed through my own quarantine system.

eSHa 2000 should not be combined with any other treatments or medications.

eSHa 2000 does NOT kill good bacteria in the aquarium. It is perfectly safe to use with all filter systems and will not interrupt the cycle of an aquarium.

Does eSHa 2000 Kill Shrimps Or Snails?

eSHa 2000 is safe to use in aquariums with both shrimp and snails. I have Red Cherry Shrimp and Ramshorn snails in all my community aquariums and I have never had an issue with die-off.

When treating with eSHa 2000, it is important to remove any ‘active’ filter media such as active carbon, oxidizers, and resins. UV sterilizers should also be switched off during treatment.

Caution should be taken not to overdose when treating with eSHa 2000.

My Final Thoughts On eSHa 2000

After a number of years of using eSHa 2000 as both a reactive treatment and a preventative measure when quarantining fish, I genuinely can’t recommend it enough. I have found it to be effective and it quickly treats a multitude of diseases. I have only once had a fish that eSHa 2000 didn’t treat, but even a heavy dosage of salt failed to clear up the infection in that Fantail goldfish.

eSHa 2000 is my go treatment and my first point of call for any of the common issues fish suffer with.