What Is eSHa Exit?

eSHa exit is a chemical treatment for all ‘spot’ causing parasites such as Ich (whitespot). eSHa exit is designed to be used with tropical or cold freshwater aquariums. eSHa exit is NOT suitable for use in marine tanks. eSHa exit can also be used to treat velvet disease (Oodinium pilularis), Pepper Spot, Black Spot, and Coarse Spot.

What Does eSHa Exit Treat?

eSHa exit treats the most common ‘spot’ diseases, such as Ich (whitespot) and also some of the less often seen, although just as deadly and contagious spot diseases such as Pepper Spot, Black Spot, and Coarse Spot.

Unlike a lot of other medications, eSHa exit also treats velvet disease. This is especially useful as it can sometimes be difficult to diagnose exactly what is wrong with an individual fish.

Having a medication that deals with a broad range of potential problems is a real advantage.

When To Use eSHa Exit?

Diseases and parasites can quickly spread in our aquariums, so treating problems promptly reduces the chance of losing the individual fish or fishes which are sick, as well as having the disease spread to other fish in our care.

Ich takes advantage of fish that are stressed or have a weakened immune system. Newly imported fish are often susceptible to Ich. Spending hours in bags during transportation or days passing through various facilities can take its toll on the fish’s health.

The first signs your fish has Ich are usually little which spots on the fish’s body or fins. Left untreated, these spots (which are actually a parasite rather than a spot) quickly multiply until they cover most of the fish. Ich multiples quickly and will soon kill a fish and spread to others in the same water.

At the first sign of small white spots, eSHa exit should be used. eSHa exit is a 3-day treatment (although it can be used for up to 5 days for more resistant parasites such as Import Spot) and in my experience, it is usually very effective. 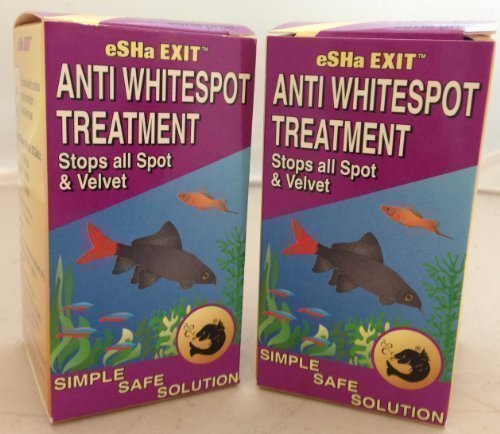 What Dosage Of ESHA Exit Should I Use?

The image below is taken from the eSHa website and shows the dosage calculations.

I have found eSHa exit to be a very effective treatment against Ich (whitespot). I have only come up against Ich a few times in recent years, but eSHa exit has cured the fish every time.

I also use eSHa exit as part of my own ‘medication trio’ when quarantining new fish. Every new fish that comes into my possession receives a dose of eSHa exit, eSHa 2000, and eSHa gdex whilst in quarantine.

All 3 medications can be safely used together. If I am unsure exactly what is wrong with one of my fish, I will often treat it with both eSHa exit and eSHa 2000 at the same time, just be sure I cure the problem. The eSHa 2000 also prevents a secondary infection from taking advantage of a sick fish.

Is eSHa Exit Safe With Shrimp And Snails?

eSHa exit is perfectly safe to use in aquariums with both shrimps and snails. I keep large colonies of Red Cherry Shrimp and all my tanks have Ramshorn snails. I have never seen any die-off as a result of using eSHa exit.

Can eSHa Exit Be Combined With Other Medications?

eSHa exit can be combined with either eSHa 2000 or eSHa gdex or both.

My Final Thoughts On ESHA Exit

I have been using eSHa exit for a number of years now. I use it whenever I believe I have an outbreak of Ich (whitespot) and also as part of my preventative treatment when quarantining new fish. If you are in the UK or mainland Europe I would highly recommend eSHa exit as a treatment for ‘spot’ parasites in your aquarium.